I’m on the phone with Ezra Miller and Claudia Kim, the day before Fantastic Beasts: The Crimes of Grindelwald opens worldwide.

“I was going to say dude, Claudia wasn’t in Dubai,” says Ezra.

In the Q&A portion towards the end of our hour-long session at the Middle East Film & Comic Con 2018, a young fan commented how much they loved Miller, saying that they didn’t deserve someone so pure. 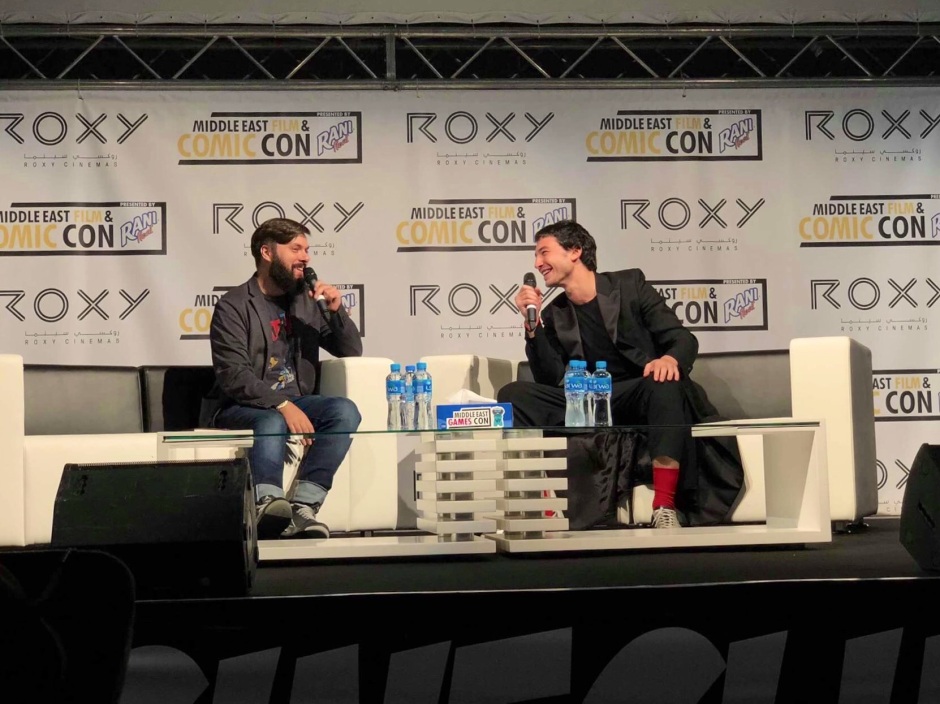 “Thank you for saying so, but I’m not pure and I don’t believe in purity,” Ezra told the crowd.

“Honestly, I think that purity is a very problematic concept, that’s gotten human beings into trouble again and again. It’s not who we are, it’s not what we’re made of. Some people say my body is a temple. For me, my body is a cauldron.”

“It’s the same idea, too, that ‘the world doesn’t deserve’ something — again, thank you, it’s a beautiful thing to say — but no, we’re all messed up, we all have problems, we all have struggles, we’re all extremely complex. Beware the person who tells you otherwise. That’s my personal feeling and philosophy. I don’t like that purity stuff. That’s not the goal. That’s not who we are. We’re here. We’re on Earth. If we weren’t broken and sick, we wouldn’t be here.”

But although he shunned this aspect of fan culture, Miller is a professed fan boy himself—making a point to tell the crowd that he is one of them.

“It’s funny, someone was saying, ‘Oh, you went out and walked the [MEFCC] floor?’ I never want to not walk the floor. My fandom is what brought me to this work. I won’t let the work push me away from the fandom. Should I ever disappoint you, I’ll simply ask for your forgiveness, and always ask for your input and your advice,” Ezra said.

“Some people just really want to be a movie star. And that’s cool, that’s valid, that’s awesome. For me, I’ve been just interested in making art that I’m passionate about.”

Now, in our phone conversation, I turn once again to this. With a growing fan base of his own—one we saw out in full force at Comic Con, was he still even comfortable with the concept of ‘fandom’?

Two years ago, when we first met, the two of us sat to speak about the first Fantastic Beasts.

“Being someone who cares so much about this universe, were you anxious about nailing this?” I asked.

“Yeah, yeah definitely,” Miller told me. “Honestly, it’s funny because at first I was just so excited. I read something in a science article that excitement and nervousness are the same neurological function. It’s just about whether or not we’re thinking about the future as good or bad. I was really excited when I got the role. Rejoicing in the street making people around me really concerned for my safety and health. A couple days later, when you start to think about it, the pressure hits you. You go, ‘oh gosh, what have I done. Oh gosh, I’m anxious!’ The anxiety is real.

“Beyond even loving this world, the fan base represents something really specific. I’m a part of that fan base so I identify with it. We’re a lot of weirdos and misfits and outcasts and nerds and punks—just strange creatures us Harry Potter super fans. That’s my community, you know? I really want to honor them. I want them to really be able to continue to engage in JK Rowling’s work, which we’ve all gotten so may gifts from. I want nothing less than to be the one who got in the way of that because I gave a terrible performance or fell down on the job in whatever way. The anxiety came on pretty strong, but that can be good fuel, nervousness. Just like excitement—it’s energy. For a performance, take it. Burn it up,” Ezra said in 2016.

I bring this up on our call.

“You were full of nerves approaching the first film…”

“No I wasn’t I was fine!” he screams. “This time I was just super confident, man! I just had no nerves, ever! I was so brave. So smart and cool. I’m not even a nerd anymore, I’m just a cool guy. Totally different. Definitely. No nerves. I’m never nervous anymore. You can’ even see me now so you don’t realize. Because we’re doing the interview on the phone,” Ezra says directly into the camera, for the audience at home.

“You’d think, he’s a totally different guy now, he’s not even nerdy or nervous or anything that starts with N-E-R,” Miller says.

After a two-minute stretch where he made various silly faces for the camera, while Claudia tells me how wonderful it was to work with him, Ezra calms down the antics.

“I’d like to say that I agree with everything Claudia said. I’m great and I do a great job. I’d like to see that and raise it one—I’m not that cool, or good. And I do have a lot of nerves. I lied to you earlier and I’m sorry. That was wrong.” Ezra says.

Fantastic Beasts: The Crimes of Grindelwald is now in theaters

iThere are no comments

Begin typing your search above and press return to search. Press Esc to cancel.